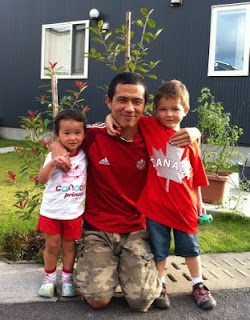 Canada Day in Canada is lovely. A lie-in, bbq, neighbours out and about, and fireworks at night. Here it was just a regular workday. Hard to get my littles excited about it, but I tried!

My mom kindly supplied us with Canada Day clothes for the kids and they were very excited to wear them. I know that doesn't sound too thrilling but dress-up is irresistible for my two.

We also had a Canadian themed dinner with maple-glazed salmon, baked potatoes and plum tomatoes straight from our garden, and even the last of my frozen brussel sprouts. I know that doesn't sound very special but I can't remember the last time we had potatoes instead of rice or noodles so it felt pretty Canadian to me. Then we had a bento-style fruit dessert.

Watermelon is so much more expensive here than in Canada so this was a real treat. Prices have come down in recent years (or maybe I've just gotten better at ferreting out deals!9, but for a whole soccer ball sized watermelon you are looking at about $25CDN. I just buy quarters and make it last. I made pickled watermelon rind so as not to waste anything.

This year because of the energy shortage and because of all the people up north still living in shelters the mentality in Japan is to save everything, from energy to food. Japanese weddings are famous for the amount of food waste they produce, but even that is being cut down. We have yet to turn our airconditioner on and most of my friends here are the same. It's a nice mentality of we're all in this together (although obviously we are not, we know nothing of the ongoing devastation in the Tohoku region and sometimes I am amazed at my own arrogance that the little I am doing will help them in anyway) and for many Japanese people this makes them reminisce of the Showa era (1926–1989). I'm not sure why, since the most recent part of that era was the wasteful bubble era!

For me though, it conjures up feelings of the Canadian prairie mentality. When you live hours away from anywhere and it's -37C and there are mountains of snow everywhere you will darn well figure out a way to reuse every single thing in your house. And then reuse it again.

Part of getting my kids to think Canadian like I do (or try to) means getting them interested in the things I grew up with. Books are obviously a big part of that, but tv and music are too. So on this Canada Day we sang the anthem (Svend version) and watched some Canadian vignettes.

The Log Driver's Waltz was my kids' favourite, by far. It was mine too! I'm quite disappointed actually that I've never danced a waltz with a log driver, I was sure I would once I grew up. Oh the unfulfilled dreams of youth!
Posted by Perogyo on Saturday, July 02, 2011