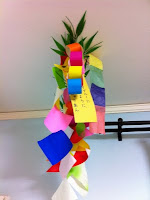 The 7th day of the 7th month is known as Tanabata in Japanese. It's about two star-crossed lovers, the stars Vega and Altair, who are separated every day except for the chance to meet on this day.

It's not celebrated with a day off, but by decorating a bamboo tree with paper rings and stars and writing down wishes. Older kids and adults generally focus on skills. I think that originally the moral of the story was these two stars weren't focusing on their work and instead spending too much time with each other, and were punished by banishment from each other for 364 days a year. Therefore people are encouraged to write down what they want to be better at. It's written as a wish, the same way as at Shinto Shrines, but in Japanese culture there is a feeling that if you write something down it is a declaration that will help you achieve that goal. So older kids will write down something about studying or getting into their school or team of choice. Younger kids usually wish to be a character though.

My son wished to be Gokai Red (red Power Ranger) and to have a donut shop. My daughter wished to be Minnie Mouse and eat her brother's donuts. I usually wish to improve my Japanese but this year I wished for my kids to use more English. Japanese is going on the backburner as making my kids bilingual is the big goal.

I wish there was a decent book about tanabata for kids in English. Wouldn't it be great if Franklin or Clifford or Fancy Nancy went to a tanabata party and wore a nice yukata? Maybe the only way to get that is to write my own book. Ha! That'll never happen.
Posted by Perogyo on Thursday, July 07, 2011