We went to the library again last week and while Domba and I headed straight for the English books, Spinky had a look around. Usually he takes out an adult book in Japanese, one with lots of pictures, such as a how-to book on sports or a fisherman's almanac (weirdo). But this time he had a look around the children's section. When Domba and I joined him at the table he had a book out and wasn't just looking at the pictures. He was reading out loud!*

My son can read.

I am in a little bit of shock here.

First off, my son can read!!! Woohoo!! Huge new worlds are going to be opening up to him. I am thrilled! He is such an amazing little guy.

But I am also pretty sad. What kind of terrible mom has no idea that her son can read on her own? How long has he been reading? Why did I not know this?

I'm also sad because he was reading in Japanese. I know in my head that this isn't a competition between Japanese and English. But in my heart...well, my heart doesn't quite get that. It kind of feels like I've been in a race and my side lost. I was hoping that by working on his pre-reading skills for the last year or so that he'd learn to read in English before he went to elementary school in 2 years and then learned to read in Japanese. Looks like my timeline was a little out of whack. I underestimated what he is learning at kindergarten.

I feel afraid. Now that he can read in Japanese, is he going to lose all interest in English? Japanese has always been dominant, but when we curl up on Domba's futon each night to read our books at night, we are in a little English cocoon. This is my favourite part of the day. Is Spinky going to to refuse to stay with us, preferring to huddle under his covers with a flashlight and a Japanese manga?

I do know that this was probably bound to happen. Japanese, despite having more characters in its syllabary than in the English alphabet, is a much easier language to learn to read as a child. There are no long or short vowels. Letters don't have one sound in some words and another sound in another word. The name for a Japanese hiragana character is the same as its reading. It's more logical, and definitely easier for a kindergarten child to grasp all the rules at once. So maybe it wasn't just my efforts that have failed, maybe a little bit of blame can be assigned to the nutjobs who have determined English spelling over the last 500 or 600 years. I'm looking at you, Mr. W. Shakespeare.

I will not lose heart. I won't shut myself in my room and curse the English language and stupid spelling and upper and lower case letters. Maybe Really, I won't.

What I am going to do is be happy for my kid. I am going to help him translate his skills in one language to the other. How? I have no clue whatsoever. But I'll do it somehow! I'm not going to pressure him to read in English all at once, just go slowly. I'm going to keep enjoying our nightly reads, continuing with the BOB Books (CAN, JP, USA), and hope for the best.

Besides, I know that in a couple of years English reading will look easy to Spinky. Or at least in comparison to Japanese kanji it will!

Do you feel that your heritage language is in competition with your community language? Do you or did you have trouble teaching your child to read? Or did all of this go swimmingly for you and you have a secret to share with me? Please let me know! 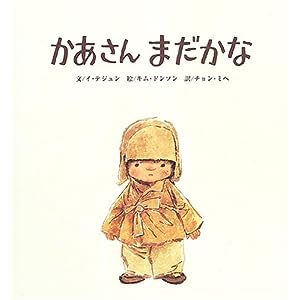 The book that so fascinated my son is called かあさん まだかな (Kaasan Mada Kana) and is actually a translation for Korean. There is an English version available as well, called Waiting for Mama (CAN, JP, USA) by Tae-Joon Lee and illustrated by Dong-Sung Kim. This is a bilingual version with Korean text as well. It's about a boy in deep winter waiting for his mother at the train station, and his view of the world around him. The illustrations are gorgeous pastel and ink creations, and very evocative of an early 20th century Korea.
Posted by Perogyo on Sunday, September 25, 2011