Sora and the Cloud

I hope you aren't looking for a critical review of this book, because what you are going to get is more gush-fest than critique.

I ordered Sora and the Cloud (CAN, JP, USA), written and illustrated by Felicia Hoshino, translated by Akiko Hoshino, and published by Immedium, solely because I heard it was bilingual Japanese-English. My "oooh shiny" obsession begins with "oooh bilingual." 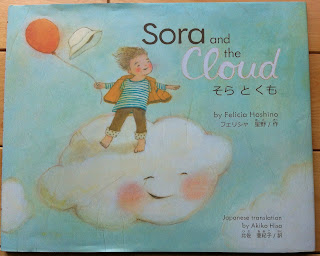 I have blathered on before about wanting books in English about Japanese cultural celebrations I could read with my kids. I knew I would be getting a little of that in this book as there is a kite festival. What I didn't realize was just how fabulous this book was going to be. I didn't realize that the inside cover flap is so detailed I would stroke it just to see if it really was washi paper. I didn't realize that I would be as excited to re-read this as I was with Harry Potter. I got very lucky.

This Showa-esque picture book takes us into a small boy's dreamscape. The aptly named Sora soars through the sky on his cloud friend Kumo-kun. Toys from his room become objects in the landscapes he sees on his adventure. An adventure we hope continues now that he's introduced his baby sister to his friend, Kumo the cloud.

The watercolour and mixed media illustrations are perfect for both the sky and the dreamscape. I enjoyed the retro feel, which for me evoked both my visions of post-war Japan and the classic toys of my 70s childhood. The facial expressions, from the exasperated mother trying to wash the floor with a child on her back (I've been there!) to Kumo the cloud's aping of the tiger plane are subtle but realistic.

This is my favourite spread in the whole book. Kumo's toys come to life with retro cars and the bugs pre-school boys love. I see something new every time, and my kids and I loved searching for the squirrel here and on all the other pages.

The boy and the cloud are drawn with the same red cheeks as in my beloved Spork. Here though, the red-cheeked boy looks like he's having a long winter nap, curled up in his futon. The red-cheeks to me symbolize winter, and flying kites is indeed a January activity in Japan. But they work just as well in windy spring in English-speaking countries when kids get out their kites.

I put this book to a real test last week when I read it, in Japanese, out loud to a group of 4-6 year old boys who (other than my son) do not speak English. The pictures and the Japanese held their attention for the longest I have ever seen it held. The translation is divine. "Kites swirl and squeal" becomes ぐるぐる きゅるきゅる 飛んでいる。(guruguru gyurugyru tondeiru), just as evocative in Japanese as in English. I had to practice beforehand, knowing that these boys would tell me if I messed up, and I enjoyed every run-through. Somehow Hoshino has hit just the right note of onomatopoeic words, giving a Japanese picture book feel even to the English words.

I loved the illustrations, the writing, and the translation. But the genius in this book is the way it portrays the passage of time. While Sora is growing up he appears 2, 3, even 4 times on the same spread. It goes so fast! But when he's flying with Kumo the cloud, time slows and Sora himself is bigger and appears less often- as any parent can tell you some afternoons with your kids seem interminable! How does that saying go? "The days are long but the years are short."

This is the perfect book for a Japanese-English bilingual family, anyone interested in introducing other cultures to their kids, and both Japanese and English monolingual families. I hope this will become a classic, it has all the hallmarks of an award winner. Don't just believe me, Kirkus Reviews and the New York Times loved it too.
Posted by Perogyo on Wednesday, January 25, 2012