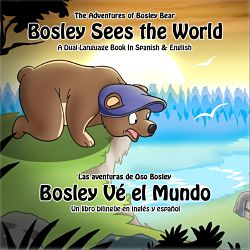 
Available for purchase at Kickstarter


I am a huge fan of bilingual books! Not just bilingual Japanese-English books, like Sora and the Cloud, which reflect the languages of our family, but books of other language pairs as well. I think multilingualism should be promoted the world over, and picture books are one of the best ways to do this.

The author of this book, Timothy Johnson, apparently feels the same way.  Like me, Japan inspired him to delve into bilingual books, but he did something productive and opened The Language Bear bilingual bookstore, and has now written his first book and had it published as a dual language book in English and Spanish.

Bosley is a bear who just wants to get out of his cave and explore the world. He dons his driving cap, says goodbye to his mother, and explores tall trees, big forests, and even bigger mountains before returning home for a nap.

Each page has matching English and Spanish text, and the vocabulary words introduced in a glossary in the back of the book are highlighted on the page, which makes it easy for second language learners as well as beginning readers to pick these words out. I think this book would be good for second graders to practice their reading skills.  I can't speak to the authenticity of the Spanish, but my kiddos enjoyed the sight of me trying to read it out (and failing!).

The digital illustrations are much in the style of a modern television cartoon, and I think they would appeal to a younger audience. My kids were distracted by the shadows, which could be improved by matching the shape of the objects rather than just being round. They really liked the detailed white birds Bosley encountered.

Do you know of any bilingual picture books?


A PDF version of Bosley and the Bear was provided to me for review by the author; however, the opinions presented here are mine.