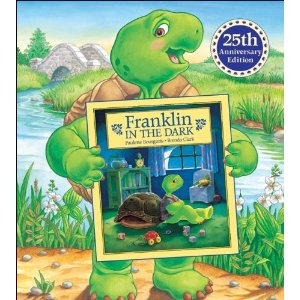 Franklin in the Dark 25th Anniversary Edition (CAN, JP, US, INT)


I won this book during a monthly roundup for the 5th Canadian Book Challenge, hosted by The Book Mine Set. It soon became a household favourite.

We have a number of Franklin books, including Franklin and the Thunderstorm which was one of the first books I reviewed on this blog. But we'd never read the one that started it all!

Franklin has many skills, including the ability to button buttons and count forwards and backwards. The problem is that even though Franklin is a turtle who is supposed to enjoy the comfort of his shell, he is afraid of the dark!

But Franklin wasn't going to just stay afraid. Pulling his shell behind him, and wearing a rainbow shirt almost all of us 80s children also had, he visits other animals for help. A duck offers him water wings, and a polar bear offers him a snowsuit. But none of these help.

What does help is knowing he is afraid but pushing on forward anyway. Franklin finds courage inside himself, and the reader finds a very special meaning and a very endearing character.

The 25th anniversary edition has some extras, including letters from the illustrator and author, a summary of Franklin's personality and adventures, and pictures of all the Franklin goods that have been produced. My kids are particularly enamoured of a brown backpack and lunchbox set with Franklin's visage.

It's easy to see why Franklin became a classic, he is absolutely adorable as well as being plucky. I love this little vignette, I'm not sure if this is new for the 25th anniversary edition or not. My daughter wants that turtle doll for her birthday! 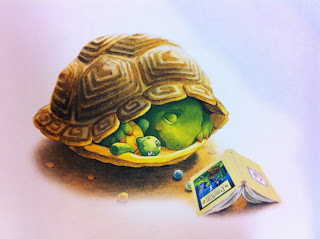 This is the 26th book I read for the 5th Canadian Book Challenge.
Posted by Perogyo on Tuesday, February 21, 2012