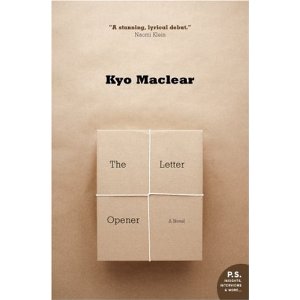 The Letter Opener (CAN, US, INT)


In The Letter Opener, Naiko works in the Undeliverable Mail Office, sifting through both objects belonging to people across Canada that have not reached their intended destination, and sifting through the memories of those around her and those who have left her. The myriad of objects she encounters all trigger memories for her and people who have affected her - not just things but guardians of the past.

There are so many parallels in this story- her coworker Andrei joins Naiko in sorting through belongings, just as his grandmother was assigned to do in Birkenau. Separation from belongings is a special sort of inhumanity seen in the Japanese internment camps in Canada, in the Holocaust, in Eastern Europe for Jews who survived, and for those forced to flee from behind the Iron Curtain.

Naiko is an old-fashioned name. Its bearers were usually born in the Taisho era, so they were of the same age as Naiko's mother would have been. Normally the name Naiko is expressed in katakana rather than having a kanji or hiragana as is common for women's names now. But if it had a kanji it would probably be 内 which is read nai or uchi and means inside, very befitting for an introspective character who provides insights into so many universal experiences.

At first I was upset that I hadn't read this the moment it was released.  However I think that it is more poignant to have read it this year, as the Arab Spring parallels the uprisings in Prague and Romania chronicled in this story set in 1989. Last year's tsunami and the work still going on trying to reunite people with their belongings has given me a sense of how important belongings truly are. I imagine the quilt Naiko has been able to pass to her mother's friend, a remnant of belongings stolen from her aunt and uncle by the government in WW2, to be a link with people she loved and will never see again. I think of the work being done in Tohoku right now, scrubbing Butsudans of mud and fixing family photos and then trying so hard to find out where the owners are, if they are.

Maclear is also the author of Spork, the book I read last year that I enjoyed the most. The trademark of Maclear's work, whether for adults or for children, is the sense that every single word is perfect, that there is no better word that could replace it.  The writing is absolutely beautiful. She makes me want to be a better writer, as if just enjoying and learning from the presentation of her craft is not enough, I need to take her inspiration and do something with it. Alas, all I really have is my poor blog.

This is the 28th book I read for the 5th Canadian Book Challenge.

Email ThisBlogThis!Share to TwitterShare to FacebookShare to Pinterest
Labels: best of the year, Canadian, challenge