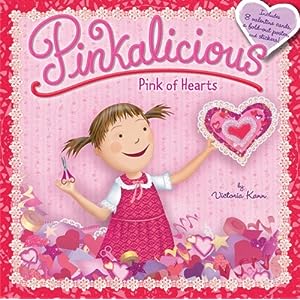 Pinkalicious: Pink of Hearts (CAN, JP, US, INT)

My daughter loves Pinkalicious. I'm not sure if it's just the name, or the pigtails (my daughter's goal in life is to grow hair long enough for pigtails). Or maybe it's just this plucky little girl who doesn't care what the world thinks of her.

This is just the latest in the line of Pinkalicious books. It has all the standards we've come to expect from Pinkalicious; pink, friendship, supportive parents and an adorable little brother, and expectations turned upside down. Pinkalicious has to make a valentine card for her best friend and give it to her at school, and is initially disappointed that she doesn't receive one as fancy.  It does however show that a poem is a heartwarming gift.

This book was a huge hit with my kids. It taught the same things as the book we read yesterday, but with the character they love, and there was no mention of Japan to throw them off. I liked this book because it shows that heartwarming is just as good as fancy, and it introduces the word poem. I think my kids are familiar with verse and rhyming but they don't know the word "poem" (until today!). I hope to create some kid poems with them in the future.

There were a lot of bonuses with this book. I wouldn't specifically buy a book for the bonuses, but I am really glad these were included. There are a lot of Valentine cards included, as well as a poster. My kids have never seen Valentine cards so I think they learned as much from that as from the book itself.