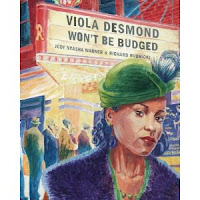 Viola Desmond Won't Be Budged (CAN, JP, US, INT)

February is Black History Month, so I looked for a relevant picture book published in Canada, halfheartedly, thinking there wouldn't be much. That wasn't my only mistaken preconception turned upside down by this book.

Viola Desmond, a small business owner in Nova Scotia in the 1940s, decides to watch a movie while waiting for her broken-down car to be fixed. She prefers a seat close to the screen, but unbeknownst to her, this movie theatre is segregated, and as a black woman she has to sit in the balcony section. After standing her ground, she is arrested and fined, and fights this horrific rule in court, making her Canada's Rosa Parks.

Rudnicki's illustrations are vibrant and full of colour and make what is happening to Desmond all too real. Warner's writing is folksy, as the narrator addresses the reader directly, like an oral story passed down by a beloved aunt. It makes this true event in Canadian history pretty accessible to the younger reader.

I think my son, at 4, might be a little too young, which I expected as the book is aimed for age 5 and up.  Not for the racism, as he is unfortunately well-versed on how skin colour determines your treatment, but he wasn't sure what court is or how that would get redress for the discrimination suffered by Desmond. I think that this will be very handy in the future as we study Canadian history, however.

I was really shocked at this story. I cannot believe that Canada had segregation into the 1940s. I also can't believe I knew nothing about this.  I thought segregation of black people was a US problem.  I also know that segregation goes on even now in Japan, but I thought that Canada was, I don't know, more enlightened or something?  I know about the Underground Railway, but I am so disappointed that even once these black people came to Canada after risking life and limb they were still treated like this. It's not like I didn't learn about other human rights violations in Canadian history, like Japanese-Canadian internment camps, residential schools for First Nations children, and Canada's Chinese tax. Why didn't I know about this?

I decided to do more research spurred on by the notes at the end of the book and found the Black History Canada website, and I am especially enamoured of their timeline. I will definitely be using this to research more and integrate it into my future afterschooling of social studies for my kids.

I guess that I am proof that Black History Month is very necessary, even for non-Americans.

This blog post was posted for Nonfiction Monday, this week hosted by Capstone Connect.

This is the 24th book I read for the 5th Canadian Book Challenge.