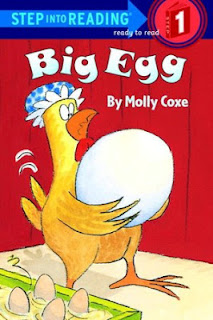 Written and Illustrated by: Molly Coxe

Spinky and I have been working on his reading for about 6 months now, slowly but surely. He has read all the Beginning Bob Books but is looking for a little more of a challenge. This is the first real book he read all by himself.

Big Egg features a mother hen tending to her chicks, even though one is almost the same size as her. The sneaky fox tries to convince her the big egg is his, but she rescues the egg just in time!

This is a great first book. It features actual conflict, the pictures give enough context to figure out the words, and it incorporates some rarely seen letters like x and q. This only word that was tough for my son to figure out was "says" because that doesn't fit into the rules he has learned so far.

"Why is it say and says?" asked my son. No real good answer from me, I'm afraid. He'll just have to learn that English is weird. It's so hard because Japanese at this stage is so logical, what you see in hiragana is what you get!

This review is for the I Can Read meme hosted this month by Family Bookshelf.
Posted by Perogyo on Saturday, March 17, 2012

Email ThisBlogThis!Share to TwitterShare to FacebookShare to Pinterest
Labels: animals, children 5+, early reader, read by myself