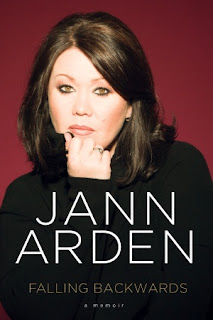 Falling Backwards (CAN, JP, US, INT)

I have to warn you, there is a big problem with this book. It will make you hungry. Now, if you are Canadian and live in Canada, it will be no problem to go to Costco and pick up a giant pack of Dad's Oatmeal cookies or Old Dutch chips. But if you are a Canadian in Japan, you're SOL. Let me tell you too, that the recipes online for Dad's oatmeal cookies will not produce the rock-hard goodness you are expecting. And what a wasted marketing opportunity this was! Why wasn't there a coupon for 50 cents* off a bag of Dad's Oatmeal cookies on the paperback versions of this book?

Other than that though, this is a fantastic read. Jann Arden takes us through the good and bad times of her youth in Alberta and Vancouver. She may not reveal everything, but you get a real sense that she is being as honest as possible, at least with her feelings around an event that left a lasting impression on her. The brutal honesty includes a view of herself during self-destructive periods in her youth, as well as her views of her father's drinking and her older brother's troubles, as he is now serving a life sentence for murder.

What is really clear in this book is that she loves and respects her parents despite their faults. Her song Good Mother has meant a lot to me as when I miss my mommy I tend to play it really loud and get into bed. I love reading about Jann's mom, the good strong hardworking Alberta mom whose crockpot meals are legendary, so much like my own mother.

Parts of it are really funny, though, and those parts really appealed to me. When you see Jann perform live or in interviews or hanging with Rick Mercer you get the feeling that she is such a funny, warm-hearted person, and this really comes through here. She's so real, there's no airbrushing. Even with the dog on train incident that appeared in the news last week, you just totally get her point of view. Who wouldn't be upset at getting asked to leave a train, even if it was your fault? She's just like the people you know, good, bad, and ugly all in one. I want to have a mojito with her. Jann! Call me! Let's go for drinks.  Or just cookies.

The way Jann grew up in rural Alberta was so similar to my upbringing. I can feel the dirt under my toes from playing in fields until 10pm when the sun started to go down. I can smell the pussy willows along the gravel roads into town. I started the Canadian reading challenge and this blog mostly because I wanted to be connected again with my youth and my Canadianess, which I feel pretty disconnected from most days. This book gave me that back, as well as insights into one of my favourite singers ever.

Just in case you were wanting the answer to the question "Who is Insensitive about", it will have to remain about the high school boy who ignored you until she writes her next autobiography.
Edit: or you could try wikipedia, it turns out Anne Loree wrote the song, about a chef at a Calgary restaurant. C'mon Alberta boys, you need to pick up your game. ;)

This is the 32nd book I have read for the 5th Canadian Book Challenge.


*I tried to find the cent key and it turns out my Japanese keyboard doesn't have one. Who knew? Not me for 13 years apparently.
Posted by Perogyo on Friday, March 23, 2012