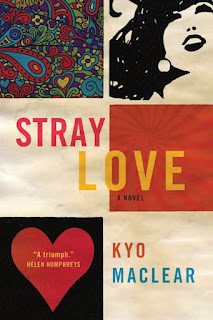 I suppose a boy can get used to almost anything, but I know I still carry a residue. It's like an ache that arises in damp weather, a hurting along my spine. From that period in my life comes the habit of circumspection, of avoiding homogenous groups, of being better than most at reading body language, of deducing exits. -Marcel in Stray Love

Here Marcel is speaking of a time when rock-throwing juvenile bullies made his life as a mixed-race boy in a London suburb hellish. But it applies equally to his other experiences of searching for his family and watching the Vietnam war go on around him in Saigon in the 1960s.

Kyo Maclear's second novel (after The Letter Opener) follows Marcel as his temporary guardianship of a pre-teen girl, the daughter of his first love, prompts the recall of memories of his youth. His own guardian, Oliver, was a war correspondent who brought 11-year old Marcel to Saigon at the beginning of the Vietnam War.

Marcel yearns to find his own identity, which can be an arduous journey for those of mixed race even with parents who are present. In the case of Marcel and childhood love Kiyomi, life as what she calls a "moggy" is more difficult because of their unconventional family situations. Marcel tries to put together the pieces of his own puzzle but there are huge gaps left by his birth mother and father.

Maclear weaves a tale in which war and love intertwine, but leaves the reader with a sense of hope. Just when Marcel's memories of racist bullies or violence on the streets of Saigon get to be almost too much, Maclear brings us back to 2001 and the rock that is Iris, Marcel's ward. Funny that an inquisitive, self-possessed preteen can be the rock for a middle-aged man, but she is. Whether because she is the product of a different culture or time or the parenting skills of her mother, Iris is blessed with both inner strength and happier experiences.

The decision to tell the story through the eyes of an artist was inspired. Those little details that Marcel notices of his surroundings to put in his sketches add a level to the narration, and it feels authentic to the character rather than just extra info from the author.

I was thrilled to received this and start reading immediately when it was released on March 20th, thanks to the magic of ebooks. But the farther I got into the book the more I slowed down, wanting to savour every new phrase. It was fantastic luck that two Maclear books, this one and the fantastic picture book, Virginia Wolf, were released in the same month, but I'm afraid the wait for her next masterpiece will be longer.

Maclear manages to personalize the big issues of race, identity, social upheaval, and war by showing us how they affect a young, sensitive boy. The way she weaves a web through time and her writing make this a sublime novel, definitely worthy of recognition by the Governor General and Giller Prize Committee. Also, she gets bonus points because Polish dumplings (i.e. perogies) were served at a London happening in the 60s.

This is the 34th book I have read for the 5th Canadian Book Challenge.
Posted by Perogyo on Thursday, March 29, 2012