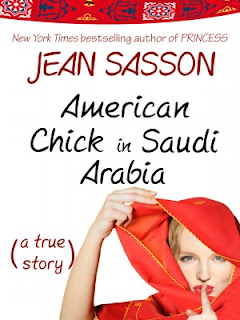 An American Chick in Saudi Arabia (US, B&N)


This is a short book, which the author suggests is the first part of a series that will be her biography. It comes in at 80 pages, and this is reflected in the price at Barnes & Noble.


Jean Sasson is known as the author of the best-selling Princess series, about a Saudi Arabian princess and her friends and daughters. The first Princess book made its way around the place I was employed during high school. Conservative women who would cringe at the use of the word feminist were passing it around and talking about the horrible treatment of Saudi women. The entire series was a unique look into life in one of the least understood countries in the world. It certainly affected me as well. The mention that eggplants, soft like a woman's flesh, were the underground symbol of the women's movement prompted my fascination with the fruit, and my kitchen decor for a long time was made up of kitschy eggplants I had collected.

I was very excited for this memoir. Not only am I a fan of Sasson's previous work, but as a female expat in a country very different from my own I wanted very much to hear about how she got along on a day-to-day basis. How did she fit in as a foreign woman? Were her experiences very different from the male expats she worked with and how? How did she deal with shopping, what did she eat, what were her culture shock moments? What was it about Saudi Arabia that turned her 2 years into 12?

Sasson excels when she tells the stories of other women.  She lets us into the lives of a Bedouin saleswoman, a mother who struggles with infertility and her child's health issues while struggling against her two-faced husband, and a wife who tries too hard to please her husband. We are able to see those shades of grey of each woman, and to understand how they deal with their lives under the veil and how they choose to accept their lot in life. Sasson does a great job illuminating their lives, as she does in the Princess series.

But she does not spend very much time on her daily life. The questions I wanted answered were not. I feel that we know her boyfriend at the time, now ex-husband, Peter, better than we know her. Perhaps this is because she spends so much time on other people, but she is more or less vanilla.  I truly hope that in her future memoirs she goes into much more detail, and my questions get answered.

The only detailed memory of hers that she gives us is of dressing up as a Saudi woman and going shopping in the full veil. I have loved dressing up in traditional dress here in Japan and certainly understand the allure. But in Japan the only danger when dressing in a summer yukata is to my ego. By dressing as a Saudi woman with fundamentalist Mutawa around is dangerous. She certainly conveys her fear and uncomfort of that time in great detail.

The pictures add quite a bit to the narration, it would be great if there were more, of Sasson but also of the areas she visited.

"I know that as long as a single woman on earth is veiled against her will, I will always carry the weight of an invisible veil on my own shoulders."

Sasson's passion for giving women of the Middle East more freedom is what defines her in the eyes of her readers. This passion gets in the way of her friendships with women whom it endangers, but it is so easy to understand. Even in Japan I get irked when I see misogyny, and it's hard not to lecture people about it despite that being the worst way to go about things.

Overall this short book doesn't quite live up to its potential. I'd like to see it released in a longer form instead of this shorter book, which seemed a bit rushed and with so many things left unsaid. I'd also like to know why she chose the word "chick" for herself as well as the three women she feature, none of whom act like a "chick". The costumed market walk is great but not enough to fill a whole book. The Kindle version had major problems and was pulled from sale after a single day, unfortunately. I hope the problems get ironed out and the next memoir has more detail.