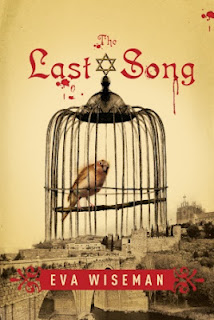 
This book describes the experiences of a fictional 15-year old girl who was raised as a Catholic in 15th century, but whose world is rocked when it is revealed to her that she is of Jewish descent. This is the time of the Spanish Inquisition, and it was a lot worse than Monty Python sketches suggest. Isabel's family are conversos, New Christians to the outside world, but she knows nothing but the mass she grew up with.  She is spurred to a search for belonging and researches Judaism, as all she knows of it are the charges put forth by the familiars of the Spanish Inquisition. Of course, for Isabel the biggest motivator is her fascination with the Jewish goldsmith's son, Yonah, typical of a 15-year old girl in any century.

The theme of freedom running though this young adult novel is symbolized in Isabel's pet lark named Anusim (the forced one, a reference to the new Christians such as her family). The beautiful cage Anusim is kept in is not unlike that chosen by her well-to-do physician father - pleasant, but still a cage. Isabel's treatment of her pet is similar to that of the friends and acquaintances of Isabel's family who play parts in their downfall during the Inquisition.

The book opens with Isabel saying things about a slave girl which are shocking to modern sensibilities. As hard as it is to read, people do treat each other badly due to race and social status, and even moreso in the past. This reality lesson is tempered by Isabel's growth, as she realizes that others are prejudiced based on lies and she too is able to face her own misconceptions. As diverse as the population of Spain is at the time, there is a strict social order, and Isabel the slave-owner is caught up in it too. I was reminded of the quote "No one is free until everyone is free."

Wiseman (Kanada, No One Must Know) writes historical fiction for middle-grade readers that focuses on the social ramifications of the treatment of Jews throughout history. Any of these books would be a good choice for students interested in reading ficitonalized account of Jewish social history after reading The Diary of Anne Frank.

This is the 36th book I have read for the 5th Canadian Book Challenge.
Posted by Perogyo on Tuesday, April 10, 2012