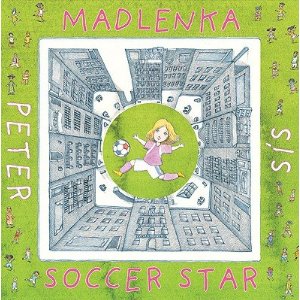 Written and illustrated by: Peter Sís

Published by: Farrar, Straus and Giroux


My soccer-mad son picked this out at our city's English bookstore, he was so excited to see a book about soccer! In English!

Madlenka's debut book was a critical darling in 2000, receiving accolades from Horn Book, Publisher's Weekly, and the New York Times Book Review. The views of an urban neighbourhood and its varied inhabitants were unique and influential.

Ten years later Sís created another Madlenka book for the 2010 FIFA World Cup in South Africa. It seems like everyone was soccer mad then and Madlenka was no exception! In this book Madlenka has caught soccer fever and wants to play it with everyone and everything- life not a requirement.

The beauty of soccer is how little equipment and preparation you need to play it. All you need is a ball and room, you don't even need shoes!  This works for Madlenka's urban neighbourhood- she has very little space but she has a ball and imagination so she can even play against a postbox. 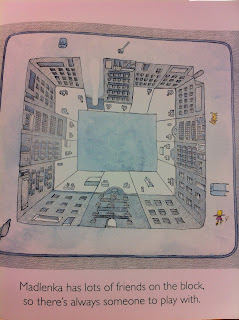 What made the original Madlenka so endearing was her interactions with her multilingual neighbours. That doesn't occur in this book, sadly. However, the very unique vantage point of the city block is still a feature of Madlenka Soccer Star. This is a great book to introduce urban landscapes to youngsters, as well as to point out how soccer can truly be played anywhere.

The last few pages have Madlenka on a field but no text so we weren't sure what to make of it. The flags of all FIFA nations do show up on one of these pages though so that was fun to see even without an explanation.

Despite its drawbacks, a child who loves soccer will be interested in this book and the imaginative ball play it may be a catalyst for!
Posted by Perogyo on Thursday, April 12, 2012