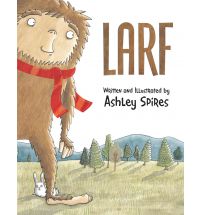 Written and illustrated by: Ashley Spires


Larf is a sasquatch. Larf is a huge, hairy sasquatch. He lives in the backwoods, with his bunny Eric, doing what he loves. But he thinks he is the only sasquatch... until he hears about a sasquatch coming to the nearby city of Hundrefitz. Larf is excited to meet another of his kind and he sets out on a journey to the city. But he has to keep this under wraps and employees a number of disguises along the way (including looking like a character in The Hangover, with his bunny in a front carrier), and mostly gets mistaken for Aunt Mildred. Larf's undercover journey is adorably hilarious.

My kids laughed all the way through this book. The dialogue is catchy, but the illustrations add another layer of both detail and humour. But the key for me here is that *I* feel like Larf. A gigantic foreign woman living in the countryside of Asia, I could probably be mistaken for Larf or Aunt Mildred. Meeting another of my kind is a dream, and yes, I dress up too! But just like Larf, I can never blend in completely with the locals. I identified with Larf all the way through, and this book reminded me that I need to keep my sense of humour just like Larf.

I like that Larf's message is not that life is about fitting in by being the same, but about finding one's place in the world and being open to friendship. I think that my kids got that part, if not the same message about the similarities between Larf and myself.

This would be a great book for kids who feel a little different, and for everyone else it definitely works to showcase the value of empathy. Spires has another hilarious book on her hands that will be a hit with the kindergarten set.

This is the 38th book I have read for the 5th Canadian Book Challenge.
Posted by Perogyo on Thursday, May 03, 2012