The Way We Fall 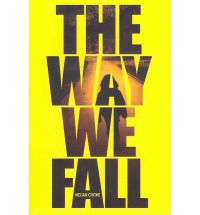 Itchy skin, cough, headache that leads to hallucinations... sounds like hay fever season. But in Crewe's carefully crafted world it is the start of an epidemic. This epidemic is deadly- and since it takes place on an Atlantic island off of Nova Scotia, there is the question of whether it can be contained or not.  There are other questions too, about how one deals with the plague in the 21st century, whether people band together or if it's every hoodlum for himself, and how to deal with your own life when everything gets turned upside down.

Crewe's protagonist, Kaelyn, is a mixed-race teen who has returned to the island after some time in the big city of Toronto. This book contains her letters to her former best friend who has left the island to pursue his dance dreams in New York. Both of these points work effectively. Although Kaelyn is making a fresh start, she is also able to provide background on the people and places she grew up with. The letters give Kaelyn a way to record things immediately but intimately - which you wouldn't find if she was just writing to record the weird happenings for posterity. We also become invested in the character of her best friend without him actually appearing.

Kaelyn's relationships change when the plague arrives, and she bonds with people she never thought she would. It's a YA novel so there is some romance and a little teenage angst but in general it is more about how Kaelyn's character and relationships evolve as the virus evolves.

I'm not sure really what category this fits in, it's not really science fiction and it's not not post apocalyptic. Is there an apocalyptic category? Most of the books I enjoy most define categorization, like Diana Gabaldon's Outlander series. It would appeal to both fans of YA fiction like Divergent and even horror books like Stephen Kind's The Stand.

I enjoy Megan Crewe's writing, which I knew beforehand from following her blog. This is a bit frightening after the Walkerton water scandal, which is real life but there is even more prevaricating on the part of the authorities. Do we really know how we could deal with a plague if it hit? I hope I never have to find out, but I thoroughly enjoyed Crewe's version of the possibility of something like this happening.

This is the 42nd book I have read for the 5th Canadian Book Challenge.

Email ThisBlogThis!Share to TwitterShare to FacebookShare to Pinterest
Labels: ages 12+, Canadian, YA