The Day I Swapped My Dad for Two Goldfish 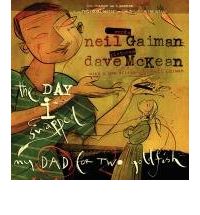 The Day I Swapped My Dad for Two Goldfish (CAN, JP, US, INT)

Happy Father's Day to all the fathers out there!

One of the books we read this year is not like the others! Others we read were Biscuit Loves Father's Day and Clifford's Day with Dad.

Then we opened up this book. The Day I Swapped My Dad for Two Goldfish is a fascinating and slightly absurd read from the author of Coraline. You know you aren't getting a straightforward read when you open up something from Neil Gaiman, but no matter how normal it looks something fishy is going on. But in Neil Gaiman's world, it's actually quite sensible.

Both my kids and I can relate to how a parent, just being a parent, doing whatever it is they do, like playing video games or cooking dinner or writing a book blog or as in this case, read the newspaper, can anger a kid so much that they want to swap that parent for something infinitely more interesting.  Like a pair of goldfish. Or a gorilla mask.

This simple swap brings a brother and sister on a journey that chronicles friendship, parents in their own world, the barter economy, bitter ginger ale, and royalty, all without knocking this pair of siblings out of their stride.

Dave McKean has partnered with Gaiman for a number of books and other projects and this one is no exception to the quality we have come to expect. The mixed media lends itself well to the absurdity of this story, but the best part is the colours and the swirling overlays of the illustrations. It really makes it look like you could be the goldfish, looking out through his eyes and his bowl at the world.

This was a great nontraditional Father's Day read.