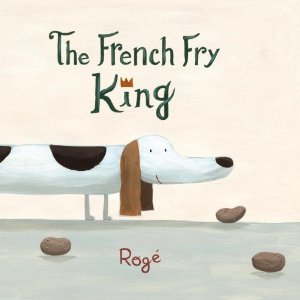 Written and Illustrated by: Rogé

Ennui. The bane of the 19th century aristocrat and the fictional children of film stars. Also, apparently, sausage dogs.

It turns out the life of Riley isn't stimulating for a dog who wants to make his mark in the world. His boredom leads to the establishment of a french fry stand. One would think that people would be wary of a dog serving fried potatoes, but people flock to the stand. His success leads to a world tour. But still Roger is not satisfied; he is unhappy that people see him only as the French Fry Kind and not as Roger. Until he meets his match!

Roger's existential plane of thought is a perfect match for the inquisitiveness of the kindergartener. I love that when he is bored he thinks outside the box. Then when he is bored again, he thinks in a completely different direction. This is perfect for reading during a long summer with lots of "I'm boooooored!" comments from vacationing students.

This was great for my personal goals of introducing Canadian and world culture to my kids. We got pop culture in spreads that include Batman costumes, skateboards, and Rubik's cubes. Then we got Canadiana in the famous Montreal newspaper, La Presse, and CBC microphones. When Roger travels around the world we get tastes and national costumes from countries on a smattering of continents.

The retro-feel illustrations show Rogé's background in graphic design. The colours are complimentary without being matchy-matchy. The texture of the sausage dog's fur makes you want to reach into the book and pet him.

I'm so glad this lived up to the expectations I had when I put this on my first list of most anticipated picture books of 2012 way back in January. It's not just about how adorable the dog is, there is so much more.


This is the 45th book I have read for the 5th Canadian Book Challenge.
Posted by Perogyo on Tuesday, June 12, 2012