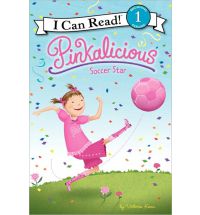 Written and Illustrated by: Victoria Kann


We have all of the Pinkalicious picture books. My daughter is a huge fan. She is over being in love with pink, now it's orange that calls to her, but she still loves Pinkalicious.

This is our first Pinkalicous I Can Read book though. Despite it being Level 1, it was on a completely different level than yesterday's Soccer Game! It's still definitely readable though.

Pinkalicious and her soccer team, the Pinksters, are playing against Tiffany and the black-clad Ravens. The Ravens kick the ball off the field and Pinkalicious goes to get it for the throw-in. First she has to find it, though! Luckily Goldilicious the unicorn is there to take her on a ball-finding mission around the world. Pinkalicious meets a number of soccer-playing girls in traditional dress on her journey.

It's a cute story, and my son loved that Tiffany said "Pink stinks." Ah yes, to be a five-year old boy and have absolute faith in the hilarity of the word stink. It definitely helps that he is familiar with these characters, that gave him context to read words he normally would not have the skills to (like Tiffany).

I do have to wonder about Pinkalicious' outfit though. The cleats and socks say soccer but the ribbon shirt says pajamas to me. Is this a dream?

I know this is supposed to be really girly, but my son liked it as much as his sister. I would recommend it for both boys and girls who are emergent readers.
Posted by Perogyo on Friday, June 01, 2012