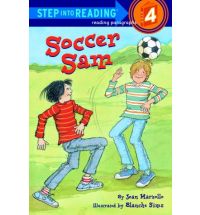 As a child of the 80s I grew up with movies like Teen Wolf. You know this type of movie. Kid has a problem that is a metaphor for not fitting in at school, but is involved in some sort of sport and has some sort of romance. There is a big game which the kid gets the winning goal in right before the buzzer.

Totally cliche. I love them.

This book reminded me somewhat of Teen Wolf. Except for the romance. There's a big game, but the problem that needs to be overcome is Sam's cousin's integration into his new school. Marco has come from Mexico for the year and not only his English minimal, he doesn't play the same games as his new classmates, and he seems very lonely. Not exactly the same hairy situation, but it's sports that binds them together.

In this book the game is soccer, which seems to be non-existent in this US school. The book was published in 1987, which might explain the kids' non-familiarity with soccer, but I think it's just one of those things that requires a suspension of disbelief.

Marco introduces soccer to his classmates who use it as a way to take down some bullying bigger kids. It's so great that he is able to bring in his culture and what he is good at. So many times when we talk about integration of immigrants what really is meant is the immigrants changing to assimilate into the new culture. I don't think that has to happen, and it's great that there is a small children's title that shows how it can work without assimilation.

Spinky wants to go by himself for a summer to Canada eventually. Well, if he had his way it would be this summer but I'll wait until he can tie his shoelaces himself! This was a great, frank treatment of how difficult it can be to go somewhere with a different culture. I think it's my fault, but he romanticizes Canada a lot because of how I talk about it when I reminisce and it's good for him to realize that a few months away might not be easy.

Many thanks to Lulu at Cherry Blossom Adventures for recommending this to me!

This is the last day of Soccer Week, as we spent the day at Spinky's soccer tournament. I'm happy to say they won!