The Rescue of Nanoose 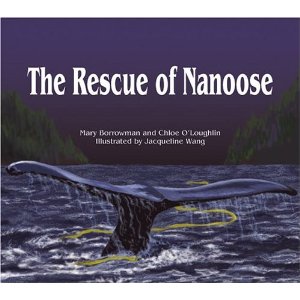 The Rescue of Nanoose (CAN, JP, US, INT)


Today in Japan it is Marine Day (海の日, umi no hi). The torrential rains which have blanketed our island have moved on, thankfully, so we slathered on the 50SPF and headed out to the beach early this morning. We didn't spy any dolphins before being inundated by other mammals of the two-legged variety.

We saw some pretty bad behaviour on behalf of those two-legged humans as well. Lots of trash on that beach, unfortunately. We read this book on the way home to realize the dangers that come from putting things in the ocean that don't belong there.

In 1994, a humpback whale was caught in the rope that was left behind by a fishing boat. It was so entangled that the whale researchers feared it could not move and needed to be rescued.  Captain Jim of the Gikumi and Captain Mike of the Blue Fjord, whale watching boats that were nearby, came close to the whale to rescue her. Captain Mike jumped in the ocean without so much as a SCUBA tank to try to loosen the rope. Under the watchful eyes of some dolphins, Captain Mike is finally able to cut the rope loose.

It states that this picture book is for 9 and up but my kids had no problem understanding any of it. They liked that the names "Nanoose" and "Gikumi" sound like Japanese words despite no relation at all.

Mostly they were fascinated with the place where this all occurred (and the huge knife used to cut Nanoose free!). Telegraph Cove is a tiny place on the northern side of Vancouver Island, near Port Hardy. The population is only 20! Captain Jim runs Stubbs Island Whale Watching with his wife Mary, who co-authored this book. My children have ordered me to rent a cabin there on our next trip to Canada! It looks like it would be a great vacation.

This was a great book to see that humans have the power to not only mess up the oceans and hurt the animals in it, but also help them. I hope it reminds my children that we need to respect the ocean that is our neighbour.

This post is for Nonfiction Monday, hosted this week at Practically Paradise. I will be hosting here at Perogies & Gyoza next week, on July 23, 2012.


This is the second book I reviewed for the Sixth Canadian Book Challenge.
Posted by Perogyo on Monday, July 16, 2012