Life is About Losing Everything 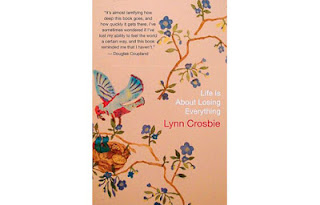 Life is About Losing Everything (CAN, US)

Published by: House of Anansi

This book is nuts. I mean that in the best way possible. Crosbie, who is best known as a pop culture writer for the Globe and Mail, gives us a a funny and at times heartbreaking look at her real and fantasy life over the better part of a recent decade. Or maybe it's more apt to say for Crosbie the worst part of a recent decade.

This collection of short stories seems disjointed because at first it seems like you are following along with the same person, but then you are unsure of whether the narrator is the same but with different surrounding players, or if you are into Crosbie's fantasy world. If you normally can be found reading heavily plotted books this can be disconcerting and takes some getting used to. But it is so much more real this way, I think. It's like you ran into Lynn at a party and you are both a little tipsy and you ask her what's been going on in her life over the seven years since you saw her last. She gives you more honesty than you are expecting, and one story rolls into another that reminds her of something else and because you're both a bit out of it you aren't really sure where in the world zombie Sylvia Plath comes into the conversation but there it is, and the way she is describing it is riveting.

This all makes it sound as if this is a funny memoir but although there are some very amusing parts there are sad, gruesome, cringeworthy, and even desperate parts interwoven, but all are candid to the point of graphic at points. If I were at this fictional party with Lynn I'm sure at some point I would grab here and ask if there isn't anything she likes about herself?

What she likes, is her dog Francis. I'm not sure if she likes anything else in her life at the time of this book though, not the drugs she does or the people she is involved with. But somehow she is able to see all of this with a sardonic wit that makes you wonder if she is trying to laugh through the pain.

It does feel disjointed, but it is that attitude, the idea that life sucks so let's meet it with dry humour, is the thread that ties her Don Ho fantasies to her times of mourning. It's effective and that's what makes it surpass a simple party story, other than her lovely and poetic turn of phrase.

An exchange with a bullying neighbour early on in the book is a pretty good example of how Crosbie approaches the rest of the book.

"The next morning, I found a little azalea outside my door with a note. It said, God never gives us more than we can bear.
I turned it over in my hands, wondering at how people so often surprise you.
I knocked on her door, and when she answered, I smashed the plant in her face.
He just did! I said."

This is the eighth book I have reviewed for the Sixth Canadian Book Challenge.