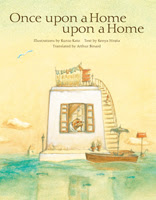 An old widower lives in the last house in a village that is being overtaken by water. When the water rises, he has to build a new house on top of the old houses, making a tall tower of memories. While he is building, he drops his tools. He dons a scuba suit to dive down to gather his tools. As he passes through each old home he remembers all the events of his life, and we see a bustling town.

This is an amazing look at how time passes, but it goes backwards as the widower dredges up old memories. It's bittersweet but not so much that it would be upsetting for a child.

It was hard for my 3-year old to understand that time was going backward, and I think this is one of those books adults enjoy more than children. My kids did like it, despite the backwards-time issue. They loved seeing fish move into the old houses. Spinky thinks it's like when he gave his baby toys to a friend's newborn, which was a pretty accurate metaphor I think!

This story actually comes from a short film called La Maison en Petits Cubes (JP:  Tsumiki no Ie) directed by Kunio Kato (the illustrator of this book). There are a few differences to this story, made probably to be more palatable to children. In the short film the widower drops his pipe but not many parents like to buy picture books about smoking!

Here is the video: