As You Were: The Tragedy at Valcartier 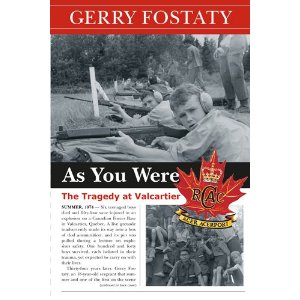 As You Were: The Tragedy at Valcartier (CAN, JP, US, INT)

For a Canadian cadet, whether army, air force, or navy, the single most important day on the calendar every year is November 11. Remembrance Day. Whether cadets are standing in parade or saluting veterans, they are part of that day everywhere in the country. The point of this day is to remember the sacrifices the men and women of the armed forces and their families have made and are making for Canada. It is to remember our successes and our failures. Lest we forget...

It seems that the military brass has forgotten the importance of remembering.

Gerry Fostaty, who was a non-commissioned officer (NCO) at Valcartier at the time of the tragic blast, is still doing his job 38 years later. Even if the army has washed over this event, he still remembers and has written this book so that others can learn about this event.

In the summer of 1974, Fostaty was an NCO at the Valcartier cadet camp in Quebec, when on July 31, during a training session a real grenade was mixed in with the dummies. When the pin was pulled out, it exploded, leaving 6 boys dead and 54 wounded.

He sets the scene of what it's like to be an army cadet, from the toothbrushes used to clean boots to the meals in the mess. The contents of the documents he received from the Department of National Defense under the Access to Information Act he explains clearly, setting the scene. The events of July 31, 1974 are described clearly and succinctly and it was so easy for me to see the mayhem through Fostaty's eyes. He includes the aftermath, up to the 35th anniversary where the survivors met for the first time since the incident. It's all extremely well-written, and so compelling I was unable to put the book down after thinking I would just read the first chapter before bed. That doesn't happen very often with nonfiction books!

This was a pretty amazing first book. Fostaty is very careful to not put words in anyone's mouth and to give his own truthful account in painstaking detail. His commitment to the truth shines through. I am sure that part of this is because it is a memoir and it is personal, I hope he applies his research skills and storytelling ability to other nonfiction tales in future, and not just limit his writing foray to this book.

What this book did was make me angry. Why haven't the Department of Defense and the army stood up to make sure that those who lost their lives or were injured are recognized for their sacrifice? Why aren't the men who still have grenade shrapnel in their bodies being taken in to see specialists who have better technology than they would have in the 1970s? Why aren't the men with PTSD from being involved in this incident seeing army psychologists on the DoD's ? Why is there still no answer as to what exactly happened to all of these boys? What procedures have been put in place to ensure this never happens again?  Why aren't people more upset about this, when if there were 6 fatalities by contaminated water there would be hell to pay? Why, when I was a cadet exactly 20 years later, was I memorizing the names of World War I fatalities and there was no mention whatsoever of the fellow cadets who had lost their lives?

Gerry Fostaty, with his excellent account of this tragic event, has ensured that the Canadian public knows that it at least happened. I for one will not forget the names of the boys who lost their lives that day:

I hope the army and Department of Defense remember too.


This is the eleventh book I have reviewed for the Sixth Canadian Book Challenge.