(you) set me on fire 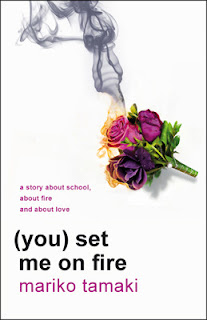 
Allison Lee is a smart, funny, generous, and loyal and teenager. She just doesn't know it yet. We learn all those things about her as she goes through her first year away at college in a dorm.

Her time in high school wasn't great. Her only friend turned love interest had public second thoughts after leading Allison on. She's been burned in not one, but two fires. Allison has a lot of things go wrong when her emotions are heightened.

She decides to make a fresh start in college and makes some different choices than her high school persona would have. But like the scars on her neck, the person Allison has always been and her experiences are still with her. When her new friendship becomes increasingly toxic Allison is too afraid of both being alone and having history repeat itself to stand up for herself. Until she decides to fight fire with fire.

My previous experience with Canadian writer Tamaki was in Emiko Superstar, which changed my opinion on graphic novels. Tamaki is excellent at capturing the awkwardness of teens who are choosing their paths. Both Emiko and Allison are trying to find their place in the world, and unsure of how much to give of themselves and how much to learn from and mould to the world around them. The best thing is that although they both make mistakes, there is hope at the end that their new choices will lead to happiness (and not toxicity!).

I'm glad that Tamaki is stretching out from gaphic novels to print novels, just because more words and details from her is always good!

This is the fifteenth book I have reviewed for the Sixth Canadian Book Challenge.
Posted by Perogyo on Saturday, September 29, 2012

Email ThisBlogThis!Share to TwitterShare to FacebookShare to Pinterest
Labels: Canadian, YA