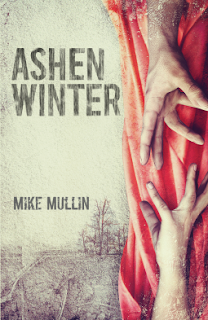 Provided by the publisher through NetGalley. All opinions are my own.

I have mentioned before that it took me a long time to read the first book in this trilogy, Ashfall. It's not because the book wasn't good, because it was amazing. It's because it's personal.

As I write this there is ash falling outside my window from our friendly neighbourhood volcano. I live a few kilometres from one of the most active volcanoes in the world. Small eruptions occur on average 3 times a day. I sweep my driveway and stairs everyday and have to load the ash into a special yellow plastic bag, as washing it away clogs drains. The hands on the gorgeous cover of this book remind me of my children's after they come in on a bad day of ash. Not to mention, this volcano is just the part of the supervolcano that lets out pressure.

So although most readers of this book think of it as post-apocalyptic fiction, I'm thinking of it as more like a how-to book.

Five Steps to Surviving a Supervolcano Eruption, brought to you by Mike Mullin:
1. Get engineering degree
2. Become proficient in a martial art
3. Stockpile weapons and antibiotics (the first might be hard here in Japan)
3. Plant lots and lots of kale
4. Get together with awesome hard-working people

Okay, you've survived, now what? It's not just about awaiting rescue, as a supervolano erupting would change the earth's atmosphere and our world for years. Now you have to deal with a winter that lasts for a very, very long time.

Alex and his girlfriend Darla made it through the first harrowing months after the eruption. They are staying with Alex's sister and other relatives. Life isn't great but they are working hard and surviving. But Alex still wants to find his parents, who left to find him before he arrived at his uncle's place. When they get a clue to his parents' whereabouts, Darla and Alex set off from the relative safety of the Illinois farm, back into Iowa to look for them. This is the start of non-stop adventure as they meet with danger in the form of layers of snow and ash, hunger, private contractors running refugee camps, slave traders, and flenser gangs. *shudder* Luckily they have their own wits, a lot of courage, and friends like a gutsy librarian and The Principal.

In trilogies we often find that there is a sophomore slump. This is not the case for the Ashfall series. It has everything we liked about the first series, plus more action. I could definitely see this as a film. The scene of Alex crawling on top of trucks waiting for a chance to flee seriously scary dudes would be a great on the big screen.

I'm really glad I was able to confront my volcano fears through both Ashfall and Ashen Winter, they're both really fast-moving books that should appeal to fans of other great YA series like Divergent.

Email ThisBlogThis!Share to TwitterShare to FacebookShare to Pinterest
Labels: post-apocalytpic, volcano, YA