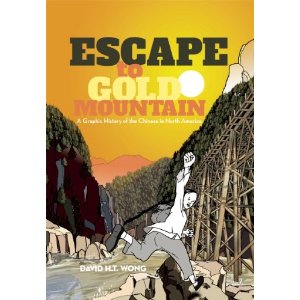 Escape to Gold Mountain (CAN, JP, US, INT)


A single graphic novel that presents the multi-generational story of the Wong family's experiences immigrating from China in search of the prosperity promised by Gam Saan (Gold Mountain) in North America and the subsequent century. Sounds ambitious? That's because it is.

The way the Chinese and people of other Asian ethinicties were, and sometimes still are, treated in Canada and the US is deplorable. From expressing work productivity in CPH (Chinamen Per Hour) to racial epithets, shameful behaviour from the past is exposed. But as deplorable as that is, the deaths that are caused from overwork and vigilantism are much worse.

Since there are so many stories and so many characters, it's hard to get too attached to any one member of the Wong family, but interpreter Ah Gin and and adopted son Sam and how they forge a new family after the loss of everyone else is very moving.

A number of famous figures from history show up in the book. It's interesting to see how quotes from Mark Twain and George Frisbie Hoar work against the backdrop of exploitation of Chinese workers, as well as how Gam Saan influenced Chinese history by moulding Sun Yat-Sen. Even Emily Carr makes an appearance as a gourmand.

There are a number of forewords from prominent Chinese Canadians, which I found out of place for a non-academic work, but I think it is great how important telling this story is to the community. Community and personal ties are important themes throughout all the stories in this graphic novel, where the ties to the village of Hoy Ping and its neighbours open doors for the Wong family. Another theme is sharing the sorrow, as stated my Grandma Wong, so as to never forget. Escape to Gold Mountain, by chronicling so many stories, is a great big step toward the goal of remembering the great sorrow of the Chinese and their descendants in North America.

The great sorrow of those who went to Gam Saan is skillfully recorded here, and serves as a warning as well. Too many of the same shameful behaviours can be seen in the 21st century; exploitation of cheap immigrant labour, immigration barriers, and racism are alive and well in Canada and other countries.

This is the twenty-first book I have reviewed for the Sixth Canadian Book Challenge.
Posted by Perogyo on Friday, October 26, 2012