Stuck With The Blooz 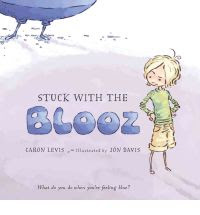 Stuck with the blues.

Sometimes bad moods sneak up on us, other times we can see them miles away. But they come, and it takes time to get rid of them.

Stuck With The Blooz gives the grumps a face, and a personality. The Blooz is big and wet and wrinkly, and absolutely adorable for someone so unwelcome.

Our hero does everything possible to get rid of The Blooz.  Food, care, attention, and even a bumpy bicycle ride. It turns out that fun is an essential ingredient to getting rid of The Blooz.

This story was a great hit at read-aloud time this weekend, and so much fun for me to actually read. How could you not love that they "made a song out of sighs"? This adorable monster gives an amazing visual for the emotions preschoolers experience so often without being able to verbalize it.

Levis' rhythmic text pairs beautifully with Davis' fetching characters, creating a character sure to delight young readers as much as other unwelcome visitors like The Cat in the Hat. The only problem with this book is that the wrinkly old monster is so adorable you're likely to want to invite The Blooz around to your house. (Good! Keep him out of mine!)
Posted by Perogyo on Tuesday, October 23, 2012