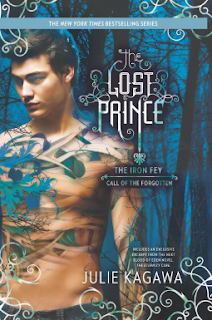 Provided for review by the publisher via NetGalley. All opinions are my own.

If you were kidnapped as a child by a group of people, would you want to see them again? Or would you spend your hard-won freedom staying away, keeping yourself and your loved ones out of their reach?

Ethan Chase, understandably, tries to keep as far away from the fey as he can, as he has nothing but bad memories of them. They held him hostage as a tot, and his half-sister went into their world and has not come back out yet. But the fey won't leave him alone. They can't be seen by everyone, so when someone can see them, they want attention. Their attention-seeking behaviour gets Ethan in a lot of trouble.

Ethan is starting a new high school and trying very hard to make it a clean start. But there is something dangerous happening in the land of Faery and he and a classmate are drawn into this world despite Ethan's valiant attempts to keep them out. He is reunited with his half-sister, but nothing goes right including that meeting. Ethan and his classmate Kenzie are reluctantly drawn into a war that could bring Faery to its knees.

Julie Kagawa is the bestselling author of The Iron Fey series and The Blood of Eden series. The first installment of that series, The Immortal Rules, is the best vampire book I've ever read and my favourite YA book so far this year, so I had really high hopes for this one. The Lost Prince is the first book in the new Call of the Forgotten series, which is a spin-off of The Iron Fey series. Many characters from that series make cameos in this book, and Iron Fey fans will be delighted with this new series. But it's easy to jump into Kagawa's books from this one, since the reader can learn all about this world along with Kenzie.

I do think, though, that reading The Iron Fey series, especially the 2 most recently published works, The Iron Knight and the novella Iron's Prophecy, will give the reader a much deeper understanding of what Ethan is going through and there is so much foreshadowing!  To be honest, though, I prefer this book to the Iron Fey series. Mostly, I think, because Ethan feels the same way about Ash, the Iron Queen's consort, as I do. I am on Team Puck and it's nice to finally get someone else who isn't Ash's biggest fan narrating the books. I also really like the supporting characters of Kierran and Kenzie.

I can't wait to find out what is in store for Ethan, Kierran, Kenzie, and the gang in the next installment of the series.
Posted by Perogyo on Thursday, October 25, 2012

Email ThisBlogThis!Share to TwitterShare to FacebookShare to Pinterest
Labels: YA