What are you reading this week?

I am reading the third book in the Heroes of Olympus series, The Mark of Athena. This is the second Greek demigod series by Rick Riordan. The first series started with Percy Jackson & The Lightning Thief, the book that was made into a movie. It focused on Greek mythology but this new series is about Greek and Roman mythology and that dichotomy is fun. I love going along on these quests. This one is really interested because instead of 3 people on the quest there are 7. Very cool dynamic, but there's a 7th wheel instead of a 3rd wheel. 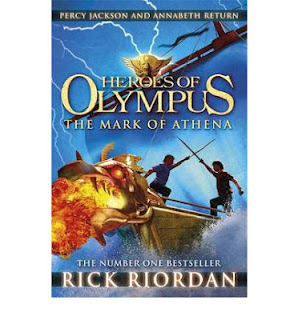 Don't you love a cover with a nice fire-breathing dragon?

My daughter is reading a Care Bears book. I am not a fan. First of all it is tiny and a hardback so it's hard for her to open it and she's gotten two little paper cuts. Then, there's no story, it's just a collection of sayings. I need to replace it with a book that has a plot and isn't dangerous to her digits.

What are you and your family reading this week?
Posted by Perogyo on Wednesday, October 10, 2012