When I Get Older: The Story Behind "Wavin' Flag" 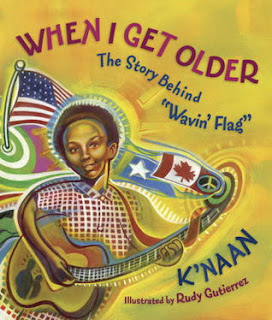 Written by: K'naan with Sol Guy

Provided by the publisher in exchange for an honest review.


The 2010 Soccer  World Cup in South Africa had some standout moments, on and off the pitch. The vuvuzela was one musical star but the sound that became synonymous with that World Cup was K'naan's song, "Wavin' Flag." You must have heard it. Even I've heard it! The inspirational and uplifting lyrics sent a message of hope to fans all over the world.

What I didn't know about the song is the man behind it is a Canadian with an inspirational story to tell. When K'naan was born in Mogadishu, it was a shining jewel of a city on the Indian Ocean. He lived with his mother, siblings, and poet grandfather until civil war broke out. His courageous mother brought them to the US and then to Canada as refugees.

Of course, even though we'd like to think that moving to Canada solved all their problems and it was happily ever after, giving up your friends, culture, and language is never easy. New words, new experiences, new footwear are all barriers to cross- but oh the feeling when he does it!

My children both loved the illustration of teen Knaan's foot in a sandal on the snow. They both love to take off their footwear (and other clothing!) just to feel the snow when it rarely visits our locale.

Gutierrez' vibrant illustrations provide layers upon layers of information and infuse the book with feeling. The way the guns that threaten on one page resemble the pointing fingers of bullies on another show how dangerous both are to the safety of a child.

K'naan's message of how important peace and freedom are, that they are worth the hard work we have to put in to get them, is told in an extremely accessible way for young readers. We are left with the refrain of K'naan's most famous song to inspire young people to work for a better world.

"When I get older,
I will be stronger.
They'll call me freedom,
just like a waving flag."

The people behind the book put Thor money where their message is. Half of the proceeds of the book go towards education in Somalia.

This review is a part of Nonfiction Monday, hosted this week by Shelf-Employed.