To Stand and Fight Together: Richard Pierpoint and the Coloured Corps of Upper Canada 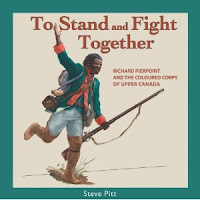 To Stand and Fight Together: Richard Pierpoint and the Coloured Corps of Upper Canada (CAN, JP, US, INT)

Today is Remembrance Day in Canada and most Commonwealth countries. In Japan there is no such holiday remembering those who have served. In fact, most people in this country think of today as "Pocky Day" where you are supposed to eat two sticks of Pocky at 11:11 on November 11. As a cadet Remembrance Day was such a huge part of my year that it is hard for me to think of today as just another day or a day dedicated to a snack. I was lucky to be able to buy a poppy (paper- what is up with that???) in the UK last week, but mostly my observance is limited to a moment of silence and reciting In Flanders Fields to my kids.

I do like to read a book about people who served at this time of year, and this year I chose this book, as it talks about the War of 1812. This year is the 200th anniversary of the War of 1812, naturally, so I wanted to do something!

In school basically what we learned about the War of 1812 was that we (as the British) burned down the White House. A little more, but not too in depth. I've done some of my own reading over time as well, but nothing this detailed.

Richard Pierpoint is the possible name of Captain Dick, a United Empire Loyalist who was brought to Canada and freedom after fighting for the British in the US War of Independence. When the War of 1812 broke out he was a senior citizen but helped to create a regiment of black soldiers although command was given to a white neighbour. His story and that of other freed slaves who defended Upper Canada are given long-awaited recognition in this book.

The book itself was a great read, with sidebars of extra information about the slave trade and military so I didn't need to keep Wikipedia open at any point. Steve Pitt is extremely good at giving context for actions on all sides, from the birth of African slavery in Britain to the continuation of the Coloured Corps until the latter half of the 19th century. I am still marveling at what Pitt could piece together with what little information remains from that era about a man with no descendants who didn't get the attention he deserved as a hero while alive.

I love it when books about history make me think about the regular guy, or a viewpoint not normally told. This book tells a story Canadians don't normally hear but should, about a man going up amazing obstacles in the twilight of his life and making a difference.

This is a great read for those who want to remember Canada's military heroes. Other great reads for Remembrance Day I have reviewed include Vimy and As You Were: The Tragedy at Valcartier, and I would recommend both heartily.

This is the twenty-second book I have reviewed for the Sixth Canadian Book Challenge.
Posted by Perogyo on Sunday, November 11, 2012