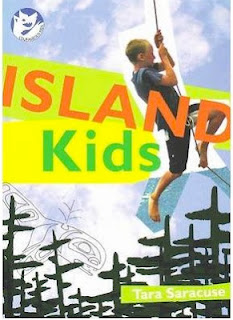 Island Kids (CAN, JP, US, INT)
Part of the Courageous Kids series

Provided by the publisher. All opinions are my own.

In this, the third book in the Courageous Kids series, Tara Saracuse explores the world of kids on the Pacific islands of British Columbia. As in the previous book I read in this series, Northern Kids, there are a number of stories from real kids about how they interact with their environment.

True to the other books in the series, the author provides stories from long ago up to the present day, drawing a timeline as the environment changes and gets more populated. From creation stories to Emily Carr and a tsunami, Saracuse manages to cover the history of Vancouver Island and the islands around it from an easily understandable kids-eye view.

My kids liked the first story, The Raven, The Clam, and The Kids, best. I think it was the description of a giant canoe big enough for 60 people made out of a single tree trunk! Personally, I liked that there were stories from a number of First Nations tribes, so that the reader gets a cross-section of views from different peoples rather than lumping them all together.

Another favourite was The Golden Rule, featuring a young boy who goes to live with his grandmother in Chinatown and celebrates Yee Lan (Summer Visitation Day). This day of celebrating the ancestors at the graveyard bears a lot of resemblance to the Obon ceremony we celebrate every summer here in Japan. How very cool it is for my kids to see the ties between an Asian-Canadian boy in western Canada and Canadian-Asian kids in southern Japan.

Also like Northern Kids, this book gives an in to talking about some of the most difficult issues in Canadian society, from racism and residential schools to the Japanese internment. By first presenting a story and then providing context, Saracuse gives the reader a good introduction to these tough topics. I can see these as a great social studies resource for upper elementary school kids.

But these aren't just great resources, they are also fun reads which catch kids' attention. With topics like dinosaur finds, a school escape, rats and slugs, a monkey called Woo, and a chocolate strike, how could any kid (or adult!) not be interested?

This post is for Nonfiction Monday, hosted this week at Wrapped in Foil.