Jack and the Baked Beanstalk 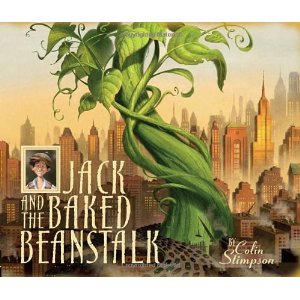 Jack and the Baked Beanstalk (CAN, JP, US, INT)


Written and illustrated by: Colin Stimpson

This reimagining of the Jack and the Beanstalk fable was on my Most Anticipated Picture Books of 2012 list, and no wonder I was salivating over it!

The visuals are just so great in this book. Stimpson has worked in film animation and this really reflects that vibe. I could totally see this on the big screen with a velvet curtain opening before the film starts. The deep colours and cartoon-like features of the characters as well as the exaggerated 1940s styles are comforting.

The story starts out similarly to all versions of this fable. Jack and his mother are dealing with extreme poverty, and he spends the last of their money on a magic bean. But this time Jack and his mother live in an old burger van, and a freeway over their location is the cause of their poverty. A trip up the beanstalk and a meeting with a friendly giant solve their problems.

The idealizing of the past, the demonizing of highways, the saving of an old business due to a famous attraction are all familiar to anyone who has watched the tv show Cars. But event though this is well-trodden ground, Stimpson puts his mark on with likeable characters and excellent execution. This was Stimpson's authorial debut and I hope the next one keeps his artistic flair and pairs it with a slightly more original story.