Can I Play Too? 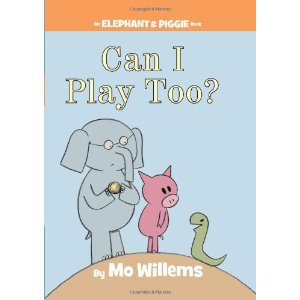 Written and Illustrated by: Mo Willems

Happy Year of the Snake! Japan uses the Chinese zodiac as well, although our new year starts on Jan. 1, not at the lunar new year, which begins later in the year (February 10 this year!). Mostly that just means putting cute animals on our New Year's cards though!

I love seasonal reads, and this one, though offbeat, fits the bill. A snake joins best friends Elephant and Piggie in this edition of their adventures.

The Elephant and Piggie series is one of the best early reader series out there. Like all the others in the series, Can I Play Too? is funny, engaging, and shows realistic dilemmas and friendships. It works as both a read-aloud for younger kids and as a first reader for kindergarten and early elementary students.

Elephant and Piggie are playing when they meet a snake, who wants to join them. But it can be hard to play with a snake, not because Willems' adorable version is poisonous or prone to asphyxiation of others, but because snakes don't have hands!

But that won't stop this pair of friends, they brainstorm and come up with a way to play with their new friend.

My son read it to us kindly and enjoyed reading it as much as we enjoyed having it read to us. This is definitely a great early reader!