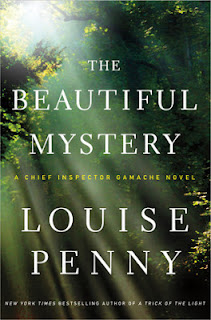 The Beautiful Mystery  (CAN, JP, US, INT)

I think I may have been the last Canadian to know about Louise Penny. After The Beautiful Mystery came out last summer, I noticed it was on the Globe & Mail Canadian bestseller list as well as the New York Times list. I figured that meant it was probably available to me on Kindle. That sounds like a bad reason to buy a book, but beggars can't be choosers and it is so hard to get adult new releases from Canada abroad. Luckily children's books are easier to get ahold of.

When I got this book I read 2 pages in and decided I needed to read the rest of the series first, and I am really glad I did. I started with Still Life and read through them all.

The first book of this mystery series starts us off kind of like Desperate Housewives, but much better. A recently departed village woman guides us to her friends and the investigation of her murder by Inspector Armand Gamache of the Sûreté du Québec. It is like a traditional whodunit in  a tiny English village or manor estate, where all of the players are known to each other. After a while you start to fall in love with the village and the people in it, from the B&B owners to the grumpy old poet.

The interesting thing about this village is it is an English-speaking one, in Québec. This means that although it is linguistically accessible to Canadians from outside Québec, the people within it are the minority in their province. This is something that I can relate to, being an English-speaker and now minority despite the privilege of my native language when I lived in Canada. To be honest, the plight of the Anglo minority in la belle province has never been something I've thought about before. Penny does an excellent job of weaving in history, cultural tensions, and creating so many different viewpoints of the same issues through the distinct voices of her characters.

Despite how much love I have for the village of Three Pines, my two favourites in this series are when Inspector Gamache is outside the village investigating other issues. Bury Your Dead, the sixth in the series, takes place in Québec city while Gamache, on leave from work after a disastrous incident occurs, sticks his head into a centuries-old mystery involving Samuel de Champlain, while working through personal and work issues. That book was just breathtaking, and it was amazing the way Penny pulled all those strings of history together.

The Beautiful Mystery is set in a remote monastery only accessible by boat. Despite its remoteness, Gamache's family and past are catching up with him and with his colleague Jean-Guy Beauvoir.

The monastery is famous for a recording they made of the monks chanting. The money and fame prove challenging to these few monks who are squirreled away from secular life. Their beautiful monastery's foundations are cracking, both literally and figuratively. Gamache and Beauvoir enter the monastery to solve the murder of one of these monks, but also end up pondering their own relationship as well as the events that have lead them to this point in time.

Once again, Penny is able to weave in threads of history with observations on the current world. If the slightest bit of fame and money can tear apart this band of brothers, what must it do to reality tv stars? It's also pretty amazing the way she can portray a person's passion for religion without being preachy. Somehow she has gotten everyone's view on the church into the book, from the man who dedicates his life to it to the atheist, without making anyone look wrong.

More than any other book in the Gamache series this one ends on a cliffhanger, however. After being able to skip right through the first 8 books it is tough to wait a year for the next book, How The Light Gets In.


This is the thirty-first book I have reviewed for the Sixth Canadian Book Challenge.