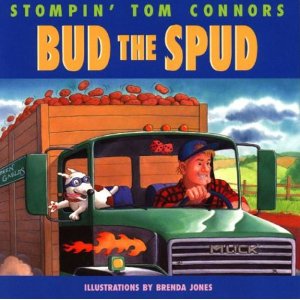 Canadians all over the world were saddened today to learn that Canadian folk hero, Stompin' Tom Connors died. His words and twang are the songs of my childhood and every Canadian sports fan can sing the refrain of The Hockey Song. His impact was profound.

One of the first books I ever bought for my kids, before my first was even born, was Bud the Spud. This picture book is basically just the illustrated lyrics of one of Stompin' Tom's most famous songs.

Bud is a truck driver bringing delicious potatoes to Toronto from the red soil island of Prince Edward Island. He passes through a number of towns and speeds along Ontario's biggest highway to the ire of the police officers stationed there.

I'm not sure if we really just love this song because it mentions places we know of. Canadians are far to easy to succumb to the flattery of people just talking about us. But I don't think so. I think it's about a guy trying to do his job, a journey, and pride in our products.

Because it's a folk song it has an amazing rhythm, and I can't read it without pronouncing potatoes as "podadas" in Tom's style. It's a great read aloud for little kids and also an introduction on how vegetables get from the farms to...Toronto.

This is the thirty-fifth book I have reviewed for the Sixth Canadian Book Challenge.