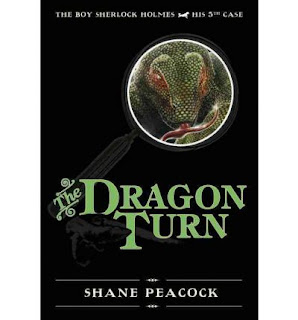 
Provided by the publisher for review through NetGalley. All opinions are my own.

The fifth outing of the boy Sherlock Holmes has all the hallmarks of the adult Sherlock Holmes series; twists and turns, deftly placed clues, an ingenious protagonist, and a cast of quirky supporting characters.

In The Dragon Turn, Sherlock and his ambitious friend Irene stumble into a murder investigation when attending a magic show featuring a dragon. Sherlock's interest is initally piqued as he cannot figure out the trick of the dragon which is quite the spectacle. But the opportunity to prove a suspect innocent and show up his police detective nemesis draw him in further.

I haven't read any others in this series, although I have read most of the Sir Arthur Conan Doyle Sherlock Holmes stories. I was worried that it would be difficult to jump into the series without having read the previous books, but it wasn't at all. Peacock gives a lot of backstory so even a first time reader has enough to understand the story, but at the same time whets the appetite for more books. I want to go back and read them all now.

I am especially interested in the people who make up Sherlock's world, especially Sigerson Bell with whom he lives, and his ailing father. I think that the romance part will most appeal to the young adult audience to whom this is directed, however.

This is the thirty-sixth book I have reviewed for the Sixth Canadian Book Challenge.