The Girl of the Wish Garden: A Thumbelina Story 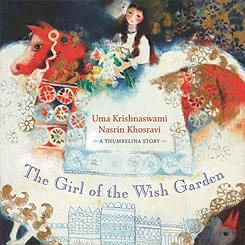 The Girl of the Wish Garden: A Thumbelina Story (CAN, JP, US, INT)


Two of the things I like most in a children's book, a positive message and an international influence are combined with lyrical writing and unbelievably gorgeous illustrations in this retelling of a classic fairy tale.

The girl we know as Thumbelina is called Lina in this story, but she is just as tiny as the one we are most familiar with. Because of her size she faces certain obstacles, because as her mother says "many dangers wait upon a girl no bigger than a thumb." She is trapped on a lily pad, crowded by crazybugs, and felt lonely in an autumn forest. But Lina never gave up. She used her gift of song to ask for help from the creatures around her. Help she receives, and later she passes on that gift when she helps a swallow whom everyone else had given up for dead.

Pay it forward is the lesson the reader takes away from this story, but it is truly the way the message is shaped that is the marvel. Krishnaswami's writing is luminous, matched only by the beauty of Khosravi's illustrations. The illustrations were originally used in a 1999 Farsi version of the story, and Krishnaswami used these to guide her to a new version of a fairy tale known around the world.

The colours of the late Iranian illustrator's are vivid and to my uneducated eye seem to have a very Persian influence. So much is packed into each illustration through the sketches and patterns of the backgrouns, as well as the overhead view of many, that I seem to see something new every time we look at the book. It keeps me thinking, and I'm sure "the land of dreams..the garden of wishes where stories are made by the folding of time" will appear in my dreams and sweeten them.

Check out the trailer for this amazing picture book and try not to fall in love with Lina.

Nasrin Khosravi illustrated more than 35 children's books- I hope that more of her art is adapted for English readers in the future.

Email ThisBlogThis!Share to TwitterShare to FacebookShare to Pinterest
Labels: ages 4+, best of the year, fairy tale