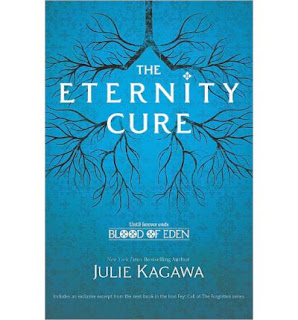 My favourite YA book of last year was the first book in the Blood of Eden series, The Immortal Rules. I have been waiting for a year for this second book in the series to come out and I wasn't disappointed in the slightest.

We are back in the same world, where the Red Lung disease has ravaged the human population and this means that vampire cities and rabid-infested wastelands abound. It's a harsh world, but our intrepid heroine, Alison Sekemoto, is back and just as engaging as before.

Kagawa has a fantastic habit of publishing short stories as teasers between books. Although this book is written so even a newbie to the Blood of Eden world could fall right into the book and not be lost, it is so much more satisfying to read the first book and the short story, Dawn of Eden, included in the 'Til the World Ends book. The back story of Red Lung and Allie's vampire sire's role in the creation of this world is not just fascinating but integral to the story in The Eternity Cure.

Allie teams up with her nemesis and blood brother Jackal and her human crush Zeke to find her sire and battle the insane Sarren who threatens the existence of the world. They make it back to her hometown of New Covington but can you ever really go home again? Her world looks mightily different after a new type of Red Lung hits the city and they battle mole men and her human companions are gone or changed.

The first book felt like a normal dystopian road trip, but this one has a western feel to it, complete with a showdown in a bar. It's packed with action scenes and emotion as rivals do battle and rely on the hospitality of various vampire city kings and their strict social code. It's a thrilling ride.

But it's the ending that makes it. The third book is set up perfectly but it will be a hard wait over the next year. I hope Kagawa blesses us again with a short story to tease us.

Email ThisBlogThis!Share to TwitterShare to FacebookShare to Pinterest
Labels: best of the year, vampire, YA