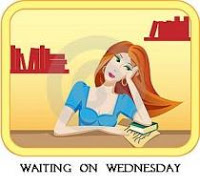 "Waiting On" Wednesday is a weekly event, hosted at Breaking the Spine, that spotlights upcoming releases that we're eagerly anticipating. From Amazon:
Aiko Cassidy is fifteen and lives with her sculptor mother in a small Midwestern town. For most of her young life, Aiko, who has cerebral palsy, has been her mother's muse. But now, she no longer wants to pose for the figures that have made her mother famous. Aiko works hard on her own dream, becoming a sought-after manga artist with a secret identity. When Aiko's mother invites her to Paris for a major exhibition of her work, Aiko resists. She'd much rather go to Japan, Manga Capital of the World, where she might be able to finally meet her father, the indigo farmer. When she gets to France, however, a hot waiter with a passion for manga and an interest in Aiko makes her wonder if being invisible is such a great thing after all.

Suzanne Kamata is the author of Losing Kei, which is the book that made me weep the most out of any book I have ever read. Her characters are ever so real and her plots are gripping. I can't wait for her newest book.
Posted by Perogyo on Wednesday, April 24, 2013