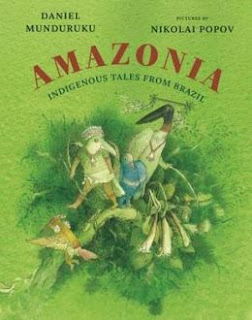 
Provided by the publisher. All opinions are my own.

The myths of a culture give us many clues to what kind of people the culture hopes the boys and girls who hear the stories will become. In Japan, the traditional tale of Momotaro (Peach Boy) shows how the culture values men who work well with others and are brave and strong.

Since this collection features myths from different cultures around the Amazon, we get insights into what Munduruku, Bororo, Manao and other peoples want their children to value.

My kids' favourite story is The Brothers Bacororo and Itubore, which is about two siblings who convinced a number of animals to stop preying on people. This creative duo tricked some animals and won fairly against others to extract promises from them to become herbivores.

One of the things we liked most about the book was the exotic plants and animals! It was fun looking up jabiru storks and harpy eagles and pawoe fish. You can see that they look as if they could be predators!


Another favourite is The Beautiful Deer, about a young man named Piripiri who turns into a deer (a weredeer?) and has a special bond with his mother. My kids said that they thought Piripiri would turn out to be dangerous because piripiri means to tingle in Japanese- I guess he made their spidey senses tingle!

We read the stories in this book before bedtime over a week and what my kids are left with are two major impressions: there are a lot of tribes and a lot of animals in the rainforest of Brazil, and smells are important to all of them.

This was a fascinating look into a variety of myths from the Amazon area of Brazil, and it's very interesting to try to compare these stories with others from other cultures like Momotaro or Odysseus, and see how similar themes crop up all over the world.