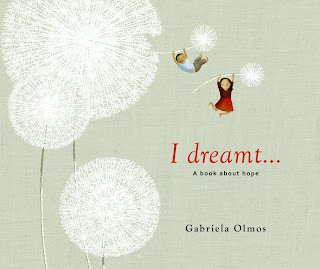 
This is one of the most powerful books I have ever read.

How is it exactly that a 36-page book, with less than 50 sentences, can evoke so much emotion?

The last decade has not been kind to Mexico. The drug war has had irreparable effects on the people; tens of thousands a year killed since 2010, over a million people displaced, and I cannot imagine what kind of fear this generates in the bystanders.

Twelve of Mexico's best illustrators have gotten together with author Gabriela Olmos to donate their art to the creation of this book, in order to give hope to the peace-seekers of the world. It was originally published in Spanish in Mexico, but in order to bring their message of peace to a larger audience it was translated into English and published in North America. The proceeds from this book will be donated to the International Board on Books for Young People's Fund for Children in Crisis.
They were extremely successful in their efforts to provide books for young survivors of the 3-11 tragedy in Japan, providing 103,360 books to 286 locations throughout the devastated region.

Many times when we participate in fundraisers, a project is thrown together just so people have an excuse to buy something and feel good about participating, whether the project is any good or not...(I've bought some really interesting cookbooks over the years which basically only consist of Cream of Mushroom soup recipes!).  But in this case it's obvious from the cover that this isn't just a fundraiser, it's a picture book of the absolute highest quality.

The premise is simple- the narrator dreams of a world where the perpetrators of violence and their weapons are changed out for happy things. Sometimes this involves a play on words (bombs bursting out in gales of laughter), sometimes ironic juxtaposition. As lovely as it would be for thieves to steal nightmares, it's not quite possible - but the thought of it is sure to put a smile on your face.

I'd never heard of any of these illustrators before this book, sadly. But their talent is evident at first glance. Every spread is a different style but the common theme and the sheer talent make them unified. Manuel Monroy's uplifing cover is a favourite, as is Marissa Arroyo's war of flowers with its newspaper tree proclaiming words of love.

This book's subjects could be disturbing, but I don't know a kindergartner who isn't aware of war or robbers or nightmares even if they aren't directly affected.  This might be hard for some sensitive readers. But I think the message of hope appeals to children- it's too bad there are so many adults who choose violence over peace.

Email ThisBlogThis!Share to TwitterShare to FacebookShare to Pinterest
Labels: best of the year, charity, Mexico, peace