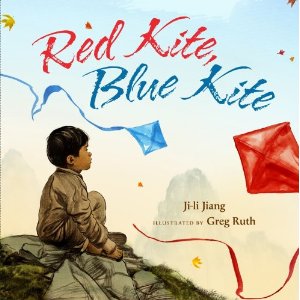 For Father's Day, I want to introduce a book about a father-child bond that not even Chairman Mao can break.

Red Kite, Blue Kite, one of my most anticipated picture books of 2013, takes place during the Cultural Revolution in China, when chaos reigned and families were broken up when members were sent to labour camps or labour farms or were just disappeared. Tai Shan is separated from his father, but at first it is so close that he can walk home on Sundays to share their favourite activity of kite-flying. But when that isn't possible, Tai Shan flies the kites for both of them so that they would look up at the sky and know the other one was looking too.

The Cultural Revolution is pretty heavy stuff for early elementary school students. But Jiang breaks it down into parts that any child could understand. Missing a parent is something that many children can understand, whether they are separated due to divorce, relocation, or one of the many conflicts going on in the world right now (I'm thinking of the children of the lawyers rounded up in Turkey these past weeks).

Focusing on the good in a situation (or the beauty in an area of pollution) is a very Asian concept, although not particular to Asia. It reminds me of the child-parent bond in the film Life is Beautiful. Two horrible situations, but you still have to live your life and might as well find the good parts- like two kites flying high above human worries.

Ruth's illustrations and affecting use of colour highlight hope, represented by the brightly coloured kites. It's amazing how a colour can be intimidating on the arms of red guards but buoyant when it is a toy controlled by a small boy meeting his father after a week apart.

A great supplementary activity for this book is fashioning a grasshopper. We used bamboo grass but you could use a straw like in this tutorial.

This is a powerful book that highlights an amazing familial bond and the triumph of the human spirit over tragedy.
Posted by Perogyo on Sunday, June 16, 2013