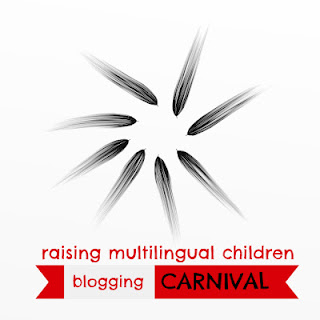 I speak only English to my kids. Even when we are out and about, unless the conversation directly involves a Japanese speaker around us, I keep it in the language they have the least exposure to. They don't always speak back to me in English, but I'm hard-headed enough to keep it up. Most people we see around a lot know this and don't get excited about it.

But in April my son started elementary school, and therefore has a new afterschool setup. Twice a week I pick him up from the afterschool place, and always greet him in English. The other kids seem absolutely mystified by this, and my son is really embarrassed. He's never been embarrassed before! They ask him if he can speak English, or they ask me if he can speak English. But he never ever speaks English in front of them. I talked to him about it, wondering if he wanted me to keep it in Japanese. He said that he hates the question. They can't speak English to him so what does it matter if he can or not?

My son has golden curly hair and freckles. It's not just the linguistic ability that sets him apart from his peers. He will never be able to pass like my daughter does. This means extra attention, and so far he has been okay with that. But from elementary school he has wanted to be taken seriously as a Japanese kid, so much that every picture he draws for school involves the Japanese flag and also usually WW2 Zero planes. These are things most six year olds in Japan don't even think about, but having visited Pearl Harbour and heard things like "60 years ago your parents' countries were at war!", he is pretty sensitive to this issue.

We ended up deciding that he would speak Japanese when he was with friends outside who aren't Japanese speakers but it was fine for me to speak English. Not the best outcome for me but I completely respect his wishes at this time, and we'll continue to talk about it in future as his feelings change.

But recently a new issues has cropped up. We have had a Japanese visitor in our home. We practice Minority Language at Home (ML@H) which means even my husband tries his best to speak English with the kids when we are all here. But what happens when someone is here who doesn't understand?

I'll admit to being stubborn. When I am talking to our visitor, I speak Japanese of course, but when I ask my son to clear the dishes, I won't ask him in Japanese. Maybe this was rude! My husband immediately reverted to Japanese, wanting to make our guest feel at home. But my son converted his feelings of hospitality into something different. He decided to interpret what I said for our guest, without any prompting on my part.

I was pleased as punch! Interpreting is a very difficult skill, and even though he wasn't speaking English, he was showing comprehension and that he is a better host than I am. Spinky did a pretty good job. I asked if he was too embarrassed to speak English but he wasn't embarrassed, just excited to have a visitor and wanting to help out.

This post is for the Raising Multilingual Children Blogging Carnival, hosted right here at Perogies & Gyoza on August 26, 2013. Please comment with a link if you would like to submit a post!
Posted by Perogyo on Friday, August 16, 2013