The Strongest Man in the World: Louis Cyr 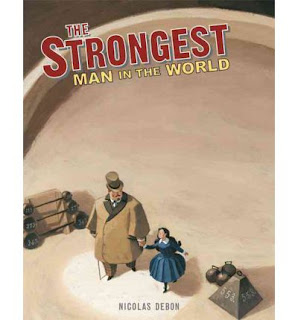 The Strongest Man in the World: Louis Cyr (CAN, JP, US, INT)

Written and Illustrated by: Nicolas Debon

I'm on a Nicolas Debon kick at the moment. It's fun to read through an author or illustrator's entire bibliography, and even more fun when the artist wears different hats. This is the second graphic novel-type nonfiction picture book both written and illustrated by Debon I have reviewed here. Both are compelling, but this is a lot easier for younger kids to follow along with, probably because the tales are told to a Cyr's young daughter.

Even in a world with thousands of cable channels, watching people perform acts of incredible strength is very popular. One can only imagine how very popular Louis Cyr was in North America at the turn of the 20th century, for he was not just strong, he was also a proud showman.

Cyr's feats of strength, like lifting a horse or a platform full of men are fascinating to young readers. So is the fact that some of his world records are still held today, over a hundred years later. But Debon never whitewashes over the hard times, and tells of Cyr's poverty and struggle to keep his wife and himself healthy and not be scammed by tricksters in show business.

The two highlights of this book are the afterword which includes photographs of the huge Louis Cyr and his family, and the the endpapers, which include other performers of the time like The Bartelli Brothers, who were bicycle equilibrists (I have no idea what they do but wish I could see!) and Bergeron who could bend iron nails with his teeth. I would love to see a story from Debon about any of the other performers as well.

This post is for Nonfiction Monday, hosted this week by Brenda at Prose & Kahn. I will be hosting next week so please get ready to submit a review!
Posted by Perogyo on Monday, August 12, 2013