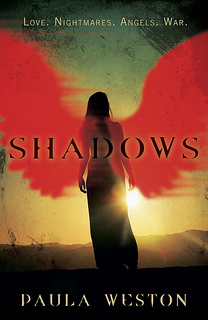 
I am ecstatic to be the Japanese stop on the North American blog tour for Paula Weston's Shadows!

(No, don't consult your atlas, just suspend a little disbelief!)

Since Gaby's twin brother died in a horrible car crash she has been plagued with nightmares. Nightmares about fighting monsters in a nightclub far away from the beach town where she is healing mentally and physically. But what if the nightmare isn't just a dream? When the gorgeous Rafa shows up and his face is right out of her dreams, Gaby starts to question what is real and what isn't.

That's when it starts to get interesting. Gaby learns about the supernatural world of the Rephaim and the monsters they fight. And fight they do! The action scenes are suspenseful and will have you holding your breath waiting for a resolution.

Weston does a fantastic job mixing the supernatural world with a really realistic small beach town of people who are shocked at what is in their midst. It feels like there is a really strong ensemble cast, and we got to meet a lot of interesting people from the Aussie town and those who are part of the Rephaim. Since this is a series and not just a trilogy I hope that the next books are going to explore Gaby's friends on both sides and get more backstory. The politics of the realm of the Angels contrasts really well to that in the town and I can't wait to see that play out!

What really makes this story for me, though, is the character development of Gaby. It's rough to lose your twin and best friend, but even rougher is that Gaby feels like in ways she is losing herself. The person she thinks she is, or who she has become, is not who others think she is. Rafa challenges her to blend her old self with her new, and Gaby is able to do that pretty convincingly, and without a lot of angst. She likes who she is now, even if she doesn't like the uncertainty of having inauthentic memories. That's what takes it a cut about a regular YA supernatural romance. Gaby and her friends are slightly older than that as well, and they act it. Even Rafa, whose chemistry with Gaby is amazing even if he does have a nasty habit of disappearing without saying anything (I'd like to have a word with him about that!!).

The next book in the Rephaim series, Haze, will be released next September. I cannot wait. More Gaby! More Rafa! More action!

Check out these other fabulous book bloggers who are posting about Shadows today!

Email ThisBlogThis!Share to TwitterShare to FacebookShare to Pinterest
Labels: Australian, best of the year, blog tour, supernatural, YA