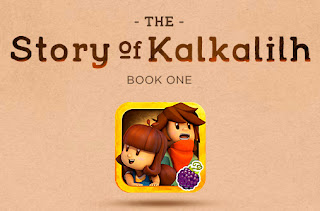 
This book app is the first in a series of Bramble Berry Tales. Lily and Thomas spend the summer in the Rocky Mountains with their grandparents. Mooshum of the Coast Salish people, and Kookum of the Cree people.

When Lily has trouble sleeping and makes mischief in the middle of the night, Mooshum tells his grandkids a legend from long ago. The tale of Kalkalilh is very similar to a story most of us are familiar with, Hansel and Gretel, but with more agency on the part of the children and their caregiver, which makes it a little less scary I think. 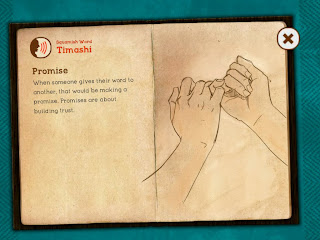 The story is well told, and would do fine as a print picture book, I believe. However, the extras in this go above and beyond. The read aloud option is a fantastic way to introduce children to the proper pronunciation of Salish words. Links to Mooshum's sketchbook are used to introduce the reader to cultural concepts of the Coast Salish people without interrupting the book. The book app itself can be read in English, French, Spanish, or Salish.

My kids had fun playing with the background images to see which ones could be moved. Their favourites were making Thomas push Lily into bed, and making the laughing skulls giggle. Both of my kids, about the same age as Lily and Thomas, enjoyed this app greatly and have already checked it out on their own a number of times. It's a little above my son's reading level, so he flips between read it to me and read it yourself. 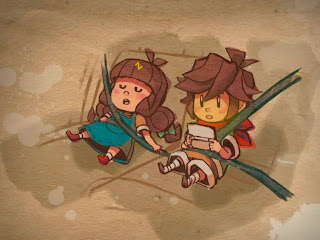 The only downside is that in the adorable animated introduction, the two kids, who are too short for their legs to go over the edge of the seat, are wearing seatbelts but not in carseats. I understand it is cuter this way, but children should be in carseats until they are tall enough (140cm) for the seatbelt to save their lives, and I would rather this set a good example.

As a Canadian reader, it was fantastic to learn more about the Coast Salish language and peoples. I learned about the potlatch in school, but so much of this was new to me as well as my kids. This is a fantastic way for Canadian kids to be introduced to one of the First Nations groups in Canada, as it combines present day with tales of the past. A first rate learning app with a stellar story, I recommend it to all book app fans.