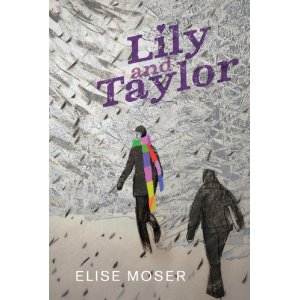 
Taylor's sister is murdered, and her life is turned upside down. She moves with her nephew to her grandmother's home, away from the place she called home and her abusive boyfriend.  The big bright spot is that she makes a friend, probably the first real friend she has ever had.

Lily, her new friend, is also her polar opposite. She's outgoing and assertive, and wears a big bright scarf because unlike Taylor she's not afraid to draw attention to herself.

These two girls have something in common- they just want to be loved and protected. Lily is the parent in her family, but really wants to still have a childhood. Taylor's life has been marred by violence from the first, and she has no one who will protect her completely. She keeps her head down, doesn't draw attention, and tries to pacify people so they treat her better.

Their burgeoning friendship, which might just be what they both need most, is threatened when Taylor's old boyfriend shows up. Will Lily and Taylor make it through this challenge unscathed and with their friendship intact?

This book is raw and gritty. There's no hiding the awfulness of poverty or of the cycle of abuse. But Lily's colourful scarf, it shows that there is always hope if you are willing to make a big step outside your comfort zone. It's a really good read for teens, whether those who might identify with either of these two girls, or those who would be will to be empathetic to their journeys.


This is the tenth book I have reviewed for the Seventh Canadian Book Challenge.